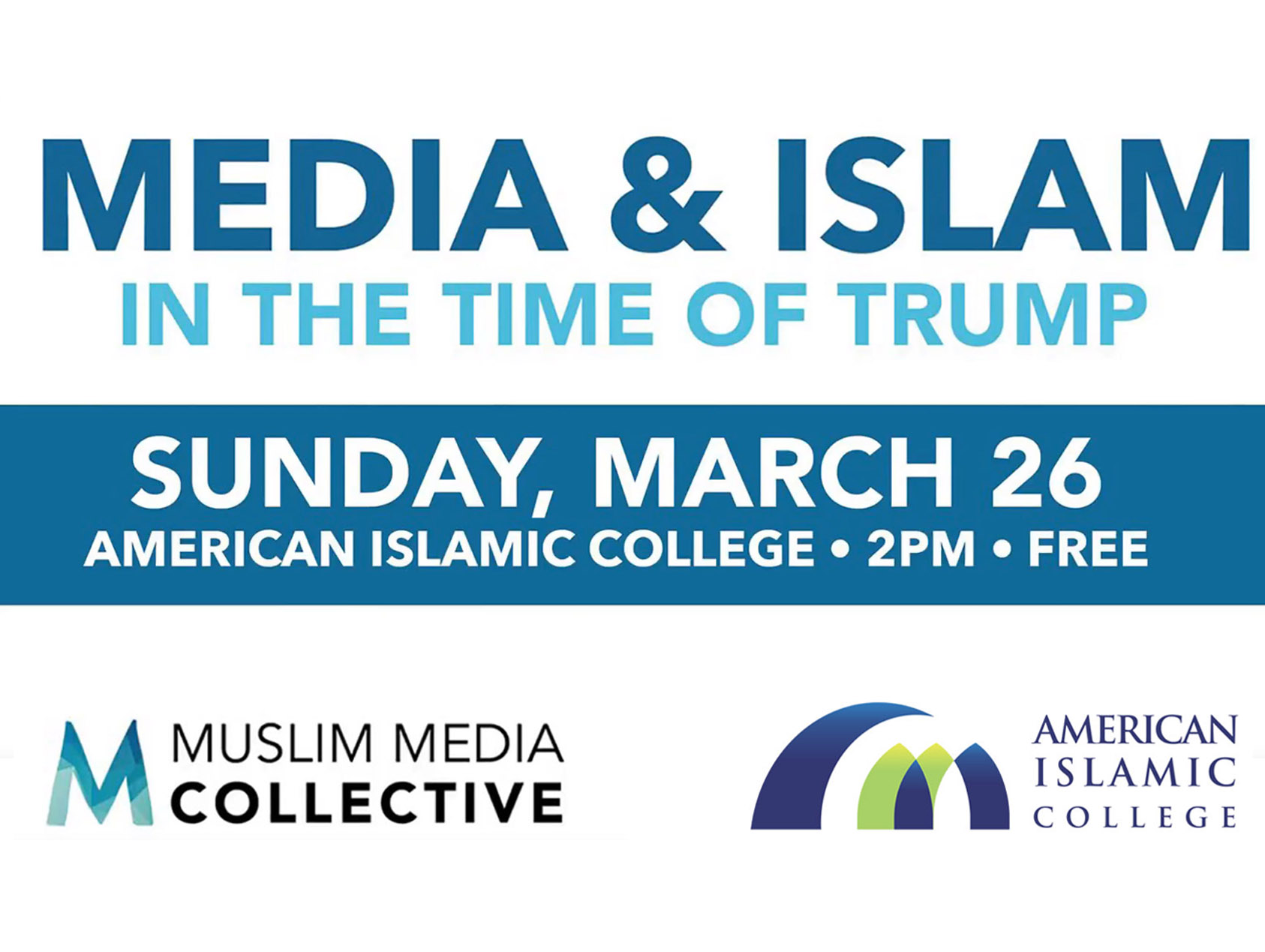 Media & Islam in the Time of Trump

On Sunday, March 26, Chicago Muslim community media activists came together for a panel presentation and discussion on the media and Islam in the time of Trump and how to challenge “fake news” and “alternative facts.” Speaking to a full house of attendees, Aymen Abdel Halim, Director, Muslim Media Collective led off the presentations by focusing on how important it is to verify one’s sources of information and to gather one’s news from multiple outlets. Bill Chambers, Editor-in-Chief, Chicago Monitor and AIC graduate student discussed how many stories in the media are un der- reported or even not reported at all because of a political agenda. He also indicated that “fake news” and “alternative facts” have been a problem for a very long time. Tahera Rahman, News Producer, Local 4 News WHBF TV stressed how important it is for the Muslim community to put pressure on their local news outlets to get the stories right and put our narratives out there. Tauseef Akbar, Research Coordinator, CAIR-Chicago and an AIC graduate student discussed how the Islamophobia industry and network is an organized political project and has increased its influence on media, government, and public life. Leena Saleh, Communications Manager for the Chicago Alliance Against Sexual Exploitation (CAASE) moderated the panel and led the question and answer segment with the audience.

Click to listen to the WBBM radio story on the panel

Chicago Muslim community media activists came together for a panel presentation and discussion on the media and Islam in the time of Trump and how to challenge “fake news” and “alternative facts.”

Aymen Abdel Halim is the Founder and Director of the Muslim Media Collective and has served in communications leadership roles for over 15 years. He holds both BA and MA degrees in Broadcast & Electronic Communication Arts from San Francisco State University where he studied media research, theory, and production. He is the author of many articles and studies on the topic of media portrayals of Islam and Muslims and authored a textbook chapter in Pearson’s Race/Gender/Class/Media (Third Edition) with Dr. Dina Ibrahim titled “How TV Makes Arabs and Muslims Feel About Themselves” based on their 2010-2011 study. Aymen has led and contributed to numerous Muslim community media, public relations, and marketing campaigns that have been featured in the New York Times, Chicago Tribune, USA Today, Al Jazeera, NPR, CNN, Huffington Post, and more. As an educator, Aymen has taught media courses at San Francisco State University and DePaul University and has presented lectures and workshops nationwide on numerous topics related to media and society. Aymen has also trained dozens of Chicago Muslim community leaders and professionals in developing communications capacity and infrastructure for their organizations.

Tahera Shireen Rahman is the evening news producer at CBS 4 News in the Quad Cities (Illinois/Iowa), where she produces the 5:00 and 10:00 pm newscasts. Prior to this, she was the producer of Radio Islam, the nation’s first daily, live talk show produced by Muslims for the mainstream market. During her tenure, Tahera led the organization to a 200% growth increase. Tahera has spoken locally as well as internationally on topics that relate to the intersection of media, women, and Islamophobia. She has also worked with Al Jazeera English in Doha, Qatar, and CBS Evening News Chicago bureau. Tahera graduated from Loyola University Chicago Magna Cum Laude in Journalism & Int’l Studies, where she was first Muslim, as well as the first Muslim woman, editor-in-chief of The Loyola Phoenix, the university’s award-winning, the weekly newspaper.

Tauseef Akbar is CAIR-Chicago’s Research Director. Tauseef Akbar studied Arabic and foundational Islamic disciplines in Cairo, Egypt at the Al-Fajr Institute, affiliated with Al-Azhar University. He received a BA in English with a concentration in Creative Writing and a minor in Chemistry at North Park University. He is slated to receive his MA in Islamic Studies from American Islamic College in Spring 2017. His research work has primarily focused on Islamophobia and demographic trends within the Muslim American community. As a researcher he has worked with leading Muslim American organizations and was also a past consultant to Georgetown Univesity’s Bridge Initiative for the study of Islamophobia. He has written and been published on the topic of Islamophobia, the War on Terror and the genocide against the Rohingya Muslims in various news media outlets.

Bill Chambers is the Editor-in-Chief of the Chicago Monitor and a contributor for three years. He is also a member of the Muslim Anti-Racism Collaborative. Bill is a full-time activist with a long history of civil rights, anti-racism, anti-war, Irish Republican, and Palestine solidarity work. As part of his activist work, Bill has He is traveled extensively to Ireland and Palestine to meet and work with community organizations. Bill has had a varied work career as a Mental Health Unit Coordinator of the Adolescent Program at Alexian Brothers Medical Center; Technical Planner at the former Continental Bank in Chicago; and a Technology Strategy Consultant for state and county governments including LA County and the District of Columbia. As a technology strategy consultant, Bill published multiple articles in technology journals and presented at numerous industry conferences for over ten years. Bill has a BA in English from Northwestern University, a MA in English from Tufts University, and Professional Certification in Family Therapy from the Family Institute of Chicago. He plans to receive his MA in Islamic Studies from American Islamic College in Spring 2017. His research focus is on Muslim Americans fighting for social justice from Civil Rights to Black Lives Matter. Bill has published multiple articles for the Electronic Intifada, Palestine in America, and the Chicago Monitor on Islamophobia, surveillance of Muslims and social justice groups, Palestine solidarity campaigns, and the movement for community control of the police.

Leena Saleh is a Communications Manager at the Chicago Alliance Against Sexual Exploitation, a non-profit aimed at transforming our community response to sexual exploitation. She had previously worked in communications at CAIR-Chicago, a local non-profit dedicated to protecting the civil liberties of Muslim Americans and dispelling stereotypes of Muslims through media production and press relations. Leena earned her Bachelor’s degree in journalism from DePaul University. She has reported on topics ranging from culture and religion to international politics and entertainment. As a freelance graphic designer, she has explored new ways of using visual communication like infographics and digital illustration. With a passion for critical communication, design, and storytelling, she hopes to advocate for an end to sex trafficking and debunk myths about prostitution and survivors of sexual exploitation.