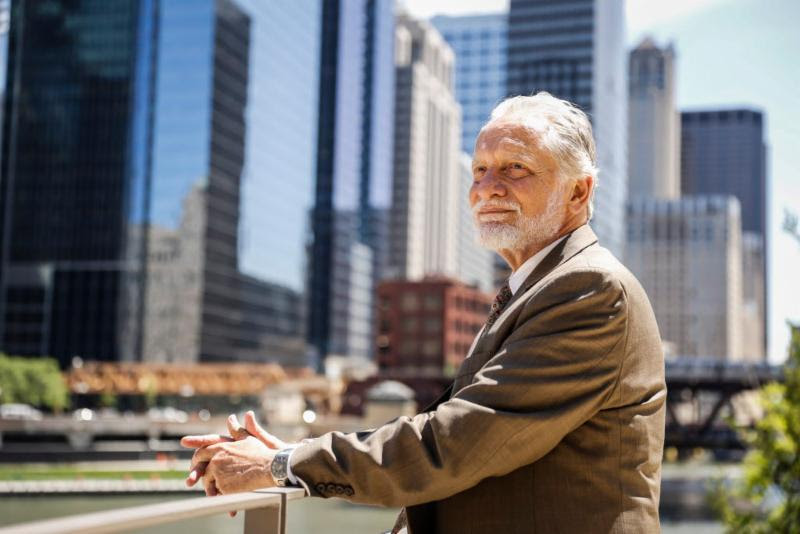 ``We're as American As We Are Islamic``

CHICAGOSUNTIMES.COM – We’re as American as we are Islamic

“I’m a cowboy, believe it or not” – born and raised in Denver.

Parents emigrated from Germany. Dad’s heritage was Jewish, mom was Christian, though neither was hugely religious. Casewit is 62. In his 20s, while traveling in Morocco, “I discovered Islam – it’s not something you normally learn about in American public schools, and I found it quite fascinating and eventually found myself embracing the faith.”

Islam seemed “like a natural progression.” His parents “weren’t religious per se” and “weren’t opposed” to him converting to Islam. Back then, “people didn’t start shaking in their boots when you spoke about it.”
What drew him in?  “It was really the spirituality in the religion,” but also the cultural aspects and “social values.”
“In Islam, it’s possible to lead a life of devotion almost with the same intensity as a monk. But you can be a married monk, you can spend a lot of time in prayer in remembering God, in reading the Koran, and these things are sort of built into the fabric of everyday life.”

Most recently, he lived in Washington, D.C., but spent more than three decades abroad – in Egypt, Morocco and Saudi Arabia. Much of that time, he was in academia.

He started at the American Islamic College last August. The school opened in the 1980s, has since closed and reopened several times. “In a sense,” it’s in a “startup mode.”  Three degrees are offered – bachelor’s and master’s degrees in Islamic Studies and a divinity degree for those wanting to become Muslim chaplains – though the school isn’t yet accredited.

Currently, there are fewer than 50 students – but he hopes enrollment will grow. School is at 640 W. Irving Park Rd. in what was once an all-girls parochial school. The former convent chapel is now a mosque. Not sure whether school “will ever have sports teams – I don’t know if we’d invest in that . . . But I think we do fill a very unique niche.”

Islam can be studied at other colleges, but generally the courses elsewhere are “not faith-centered” like at his school.
“We do engage in academic rigor and critical thinking.”  But “the basic beliefs and texts of the religion . . . they won’t be challenged in terms of their basic validity.”

Estimates show at least several hundred thousand Muslims in Illinois. Ramadan – a “holy month” of fasting, praying to get closer to God – is now.  In the news, two men were killed in Portland, Ore., standing up for one or more women believed to be Muslim and being harassed by an alleged white supremacist. “They are very great heroes. One hopes we won’t have to see that type of heroism again.” Casewit’s school is among only a handful of Muslim colleges in the United States. “We’re as American as we are Islamic.”

“One longs for those days” when Islam isn’t constantly mentioned in the same breath as terrorism. “Yet I can’t say that all Muslims are innocent.”

American Islamic College president Daoud Casewit: With the Koran, “because of its perceived divine source, you wanted to glorify it . . . make it very beautiful.” | Rich Hein / Sun-Times

So much of Islamic extremism is spread online. “It’s a difficult battle.”

“We don’t have a program where we’re trying to detoxify extremists, we just try to get students to imbibe an inclusive understanding and appreciation of Islam, a non-judgmental approach to other Muslims and other peoples and other sects,” and emphasize the importance of interfaith relations.

There’s an event in the works co-sponsored by the school about the use of calligraphy in Islam.  With the Koran, “because of its perceived divine source, you wanted to glorify it . . . make it very beautiful.”

“I definitely believe” that Islam is a faith of the future in the Chicago area. “I believe that every religion has cycles . . . rise and decline.” Undergraduate tuition is less than $4,000 a semester, but many students get a scholarship. “We’re not racing to become a giant institution,” but Casewit wants the school to expand course and degree offerings.

Face to Faith appears Sundays in the Chicago Sun-Times with an accompanying audio podcast, with additional content, available at chicago.suntimes.com and on iTunes and Google Play.
2017
0
AIC Community Talk: Yemen’s Forgotten Humanitarian CrisisPrevious Post
Media & Islam in the Time of TrumpNext Post