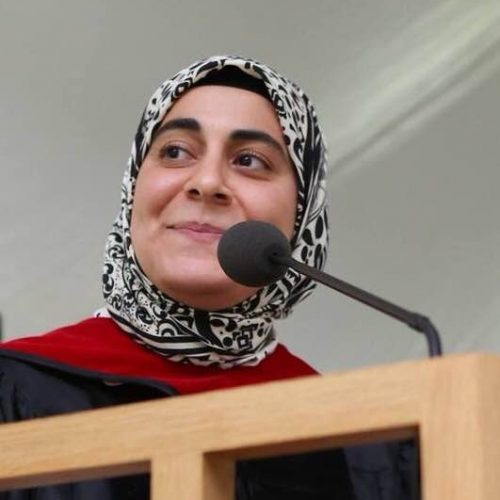 American Islamic College is delighted to announce the appointment of Dr. Feryal Salem as Associate Professor of Arabic and Islamic Studies and Director of the Master of Divinity in Islamic Studies and Muslim Chaplaincy Program. Holding a doctoral degree in Islamic Studies from the University of Chicago, Dr. Salem has also undergone traditional Islamic training in the Arab World in fields such as Qur’anic recitation, hadith studies, Islamic legal methodology, theology and logic, Fiqh and Prophetic biography.

She comes to AIC from Hartford Seminary where she previously taught Islamic Studies and ran the nationally-acclaimed Islamic Chaplaincy Program. Dr. Salem was recently recognized by CNN as one of twenty-five influential Muslim Americans for the work she has done training Muslim chaplains. AIC’s programs in Islamic Studies and our up and coming Muslim Chaplaincy Program will certainly be enriched by the academic expertise, and professional connections that Dr. Salem will bring to our institution.

Dr. Salem said, “I am excited to be able to build upon the work I have done over the years in teaching, scholarship, and directing an Islamic chaplaincy program. With around half a million Muslims centered in and around the Chicagoland area, I believe American Islamic College is strategically placed with access to important resources that would truly enable a Muslim chaplaincy program there to thrive. I also look forward to being a part of the vibrant cosmopolitan and intellectual environment that the city of Chicago offers in terms of scholarly engagement and community involvement.”

In the words of AIC President Daoud Casewit: “Dr. Salem is a welcome new presence at American Islamic College as she has many local and international connections which will facilitate in enhancing AIC’s role on both of these fronts. Among her responsibilities will be to help lay the institutional foundation of a relevant and rigorous training in Islamic Divinity/Chaplaincy. Dr. Salem will also work with the AIC administration to support the College in solidifying its goals in terms of outreach and the expansion of its student base.”