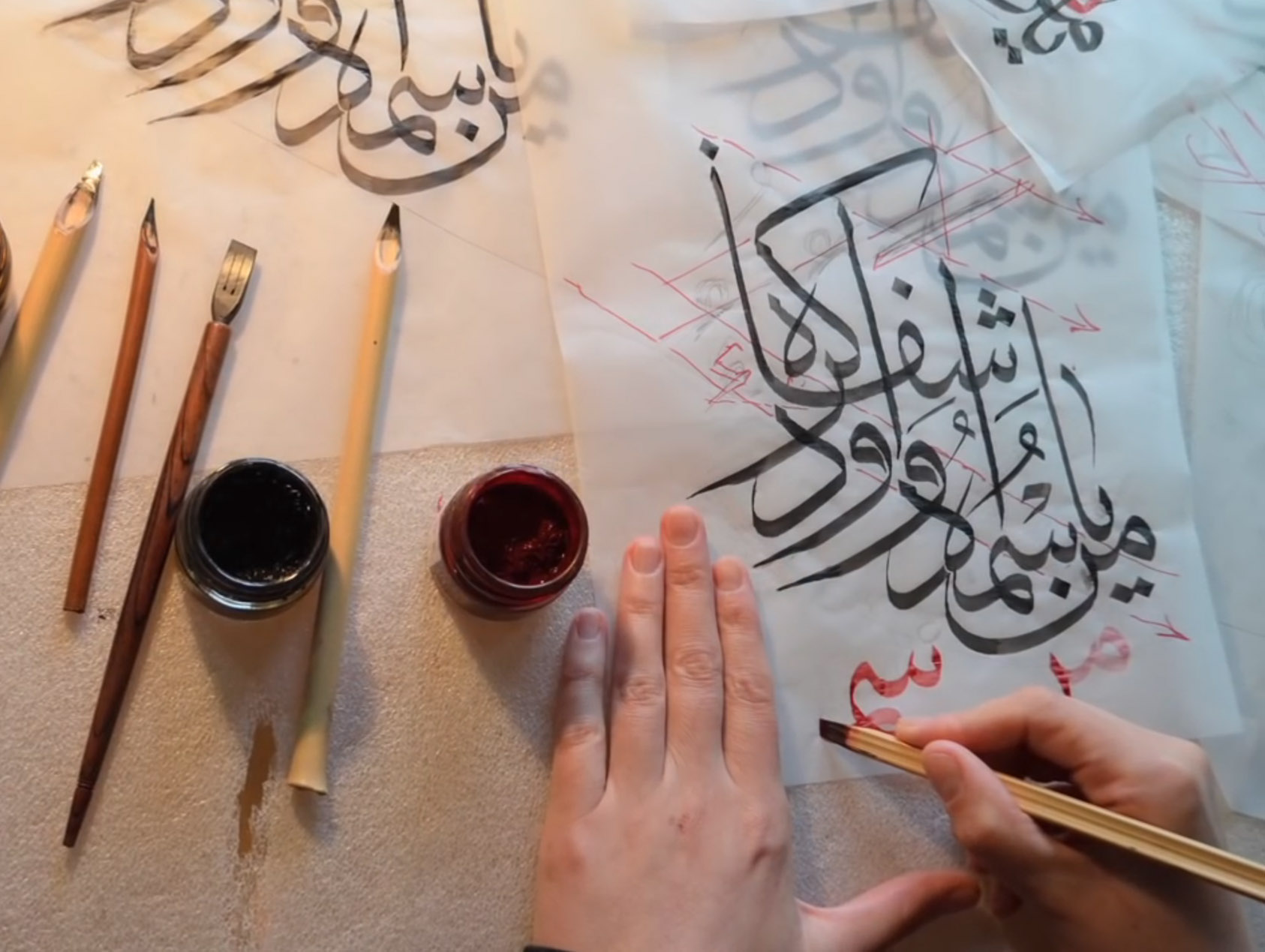 August 16, 2017 by mesut Latest News, Past Events, Past Lectures 0 comments

Northwestern University’s Institute for the Study of Islamic Thought in Africa held a conference on Islamic art and manuscripts. Special guests, Nuria Garcia Masip & Mohamed Ahmed Salem shared their expertise in the art of Arabic Calligraphy with a lecture and workshop at AIC.

The aim of this workshop is to familiarize participants with the main elements present in Islamic calligraphy. The workshop will be hands-on practice and participants will be introduced to the traditional materials, system of proportions, and main aesthetic elements of calligraphy. This is a unique opportunity to participate in a workshop done by two masters of two different schools of Islamic calligraphy, and appreciate the different approaches and styles that characterize this rich tradition

One-time registration fee of $15/person covers cost of supplies, which will be offered in class. [Sold out!]

JULY 22, 2017. A unique international gathering of specialists will convene for a workshop: “Working with Islamic manuscripts in Africa” on the Northwestern campus for seven days, beginning August 13th. They will be studying a literary tradition that was not even known to exist 50 years ago, when the eminent British historian, Hugh Trevor-Roper, declared that Africa had no history, only the history of Europe in Africa, since there was no written record in Africa’s past. Since then, tens of thousands of manuscripts – some say they number in the hundreds of thousands – have been discovered. Today, much of the world has heard of the endangered manuscripts of Timbuktu that were threatened in 2012 by Islamic extremists; what is not so well known is that the Timbuktu manuscripts are but a fragment of a literary heritage that stretches across West Africa to East Africa and down that coast to Mozambique. Robert Launay, speaking for the sponsoring Institute for the Study of Islamic Thought in Africa, explains: “This conference will be a valuable opportunity to expose scholars and laypersons alike to the rich heritage of Islamic writing in Africa. It also will serve to remind all of us, in these troubled times, that Islamic culture in Africa and elsewhere has a long history of peaceful, philosophical and introspective thought, to say nothing of the significance of Arabic in Africa where it was used to record African languages.”

Northwestern, in collaboration with the University of Illinois at Urbana, the American Islamic College, and the University of Hamburg Center for Manuscript Studies, and with the help of the Field Museum, Newberry Library, and the Oriental Institute Museum at the University of Chicago, will host fifteen US researchers and librarians for the workshop. Their teachers will be eight curators from African manuscript libraries and an international group of specialists from Paris, Cape Town, Hamburg and a half-dozen US universities. The African curators, coming from Senegal, Ghana, Mauritania, Nigeria, Ethiopia, Zanzibar and Mozambique, will then hold a three-day workshop of their own to craft an open-access electronic international database of African manuscripts. For the general public, the American Islamic College will hold a three-day course on calligraphy August 17-19, beginning with a public lecture on “The Art of Islamic calligraphy: Scripts and Transmission” taught by two internationally acclaimed calligraphers, from Paris and Mauritania.

Several international workshops on the materiality of Islamic manuscripts, known as ‘codicology’ (the study of papers, inks, format, and structure), have taken place during the past five years. This is the first to bring together the African curators and the end-users of their manuscripts in the U.S. to educate each other about this newly discovered African literature. One focus will be on the African languages that were transcribed in the Arabic script and that make up nearly 15% of all manuscripts uncovered to date. Another focus will be the ongoing discovery of yet more of this literary heritage once said to not exist, and how to make it accessible to students of Africa.