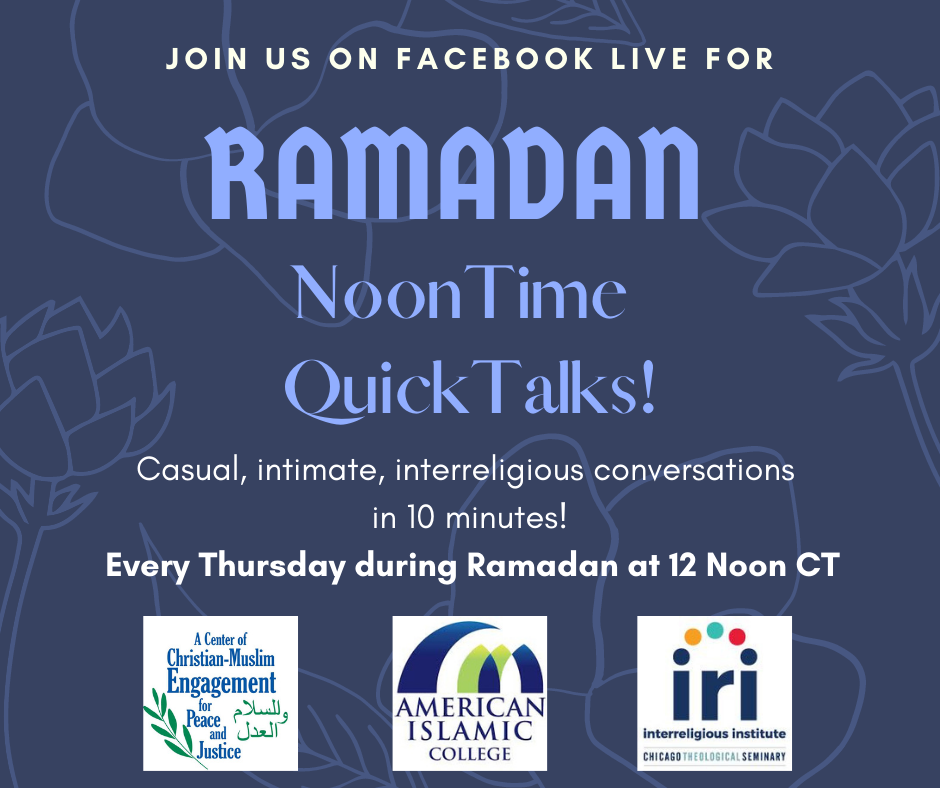 Sara Trumm serves as the director at A Center of Christian-Muslim Engagement for Peace and Justice (CCME) at Lutheran School of Theology at Chicago.  Although she grew up in a seemingly mono-cultural Minnesota town, she is thankful to have had many educational and social experiences to guide and expand her worldview.  She received a BA from Augsburg College, an MA from Luther Seminary, and served at the Henry Martyn Institute in Hyderabad, India. Her work at CCME began in 2008, and she is continuously amazed at how the interfaith community in Chicago enhances and challenges her faith, as well as creatively collaborating for peace and justice for all. Sara became a Community Ambassador through Interfaith Youth Core and is a Qualified Administrator for the Intercultural Development Inventory.

Ozlen Keskin is the Director of Admissions and the Registrar at American Islamic College where she has dedicated 10 years to serving its students and promoting its mission. Ozlen also volunteers at Islamic Society of Midwest’s (ISOM) Women’s Club where she’s helped organize interfaith and intra-faith programs. Additionally, the Club organizes spiritual nights, iftars, picnics, and other family events for the community. Ozlen volunteers in coordinating visits from high school and/or college students at ISOM for a Jumah (Friday) prayer service, as well. Ozlen holds an MBA degree with Human Resources concentration.

Serving as AIC’s new President as well as a member of the academic faculty, Dr. Timothy J. Gianotti is an accomplished scholar of classical Islamic theology, philosophy, and spirituality with strong interests in Islamic Psychology, Moral Theology, Ethics, Political Thought, comparative religion and spirituality, and interfaith relations; more specifically, he is a scholar of Abu Hamid al-Ghazali (d.1111), one of the most important religious thinkers of the classical period. Dr. Gianotti is also recognized as a Muslim theologian, pastoral leader, and committed interfaith advocate with extensive experience promoting interfaith engagement around the globe.

Professor Mikva served as a congregational rabbi for thirteen years before returning to academia.  Her research and teaching focus on interpretation of the Hebrew Bible in various times and places, exploring how the ideas both shape and reflect the societies in which they unfold. She is especially interested in the intersections of exegesis, culture and ethics.

The most profound truths are not simple ones, and they often live in dialectical tension with other truths. Pursuit of justice is essential, but the equally compelling call to mercy sometimes (gently) pushes justice aside. Freedom is a God-given right, but freedom without commitment and purpose leaves us rootless. Peace is our perpetual desire, even as we sometimes decide we must fight. We also live with the breathtaking and terrifying knowledge that religious passion is a catalyst for great good, but all too often is wielded as a weapon.

“Much of rabbinic literature is devoted to exploring these tensions, trying to sketch the limits of our ideas so they don’t become dangerous absolutes. There is a Divine standard, but it has always been mediated humanly. The fact that the Hebrew Bible itself did not become Scripture before it had already begun to be multiply interpreted should help us see that it is the ongoing search for meaning that makes for a holy text. We search together in community and help each other reach toward the Divine call. In this journey, we find religious inspiration and guidance. It marks a path to redemption.”

Kim Schultz is the Coordinator of Creative Initiatives at the IRI and Interim Director of Communications at CTS. Kim is also an actor, writer and storyteller. She has worked at many national theatres as an actor and writer. And in 2009, she was commissioned to travel to the Middle East as an artist/activist to meet with Iraqi refugees and write a play inspired by the trip. Out of that came the play “No Place Called Home” which was performed at the Kennedy Center in Washington, D.C. Compelled to further share her story and advocate for refugees worldwide, Kim authored the memoir, “Three Days in Damascus” (Palewell Press, 2016). Kim joined Shoulder to Shoulder in 2019 on their Ramadan Roadtrip to gather stories and create videos about Ramadan, Allyship and being Muslim in America.

CEO of The Muslim Mix

Aseelah Rashid is Co-founder and CEO of The Muslim Mix, Inc. a 501c3 non-profit organization
which presents creative social events and environments targeted at Muslim young adults, while
also fostering social justice activism, and work specifically directed at changing the narrative
about Muslim Americans and how they’re portrayed in the media, and society.

As an active organizer within the Interfaith community, she currently serves on the Board for
Atlanta Interfaith Broadcasters (AIB) and Faith Alliance of Metro Atlanta (FAMA). She partners
with the American Jewish Committee (AJC), serving on the steering committee to facilitate
Muslim-Jewish Dialogues. And she regularly hosts Interfaith Visits to the Local Mosques in the
Atlanta, GA area.

She is well known and recognized for her exceptional leadership within the Muslim community
in the United States. Aseelah has curated, and convened high quality, high impact programming
for people in Georgia and across the region. She has traveled extensively throughout the United
States, Europe and the Middle East to build bridges and amplify female voices across religious,
cultural and ethnic lines.

Outside of her work within faith communities and service, Aseelah enjoys spending time with her Husband, Adrian “Asim” Rogers and their three sons, Righteous, Noble and Scholar.

Romana Manzoor is the Director of Institutional Research and Effectiveness at American Islamic College where she also coordinates interfaith activities and campus events. She holds an MA in Interreligious Studies and is pursuing an MEd in Higher Education at Loyola University at Chicago. Romana joined AIC in 2010 to help revive the College, uplift interfaith and intercultural work, and participate closely in accreditation matters. Through her educational and professional journey, she has grown passionate about Muslim higher education, higher education policy, accreditation policies, and existing issues around equity and representation for marginalized students.

Fatima el Mohammed is an undergraduate student at American Islamic College. Her parents are from Ghana and Nigeria. She is a first-generation American student. She has spent many years working with young Muslims. Fatima is very active at her local mosque where she teaches religious education. Fatima is now serving as an executive board member there. She’s also involved in the Illinois Muslim Civic Coalition where she was invited as a guest speaker to address stress and mental wellness associated with the pandemic. She’s also an advocate for raising awareness on domestic violence, having met with congressional officials and mayoral candidates of Chicago to work on these issues. Fatima was also involved in promoting the U.S. Census and worked with the community on educating them about what the Census is and why it is important to participate.