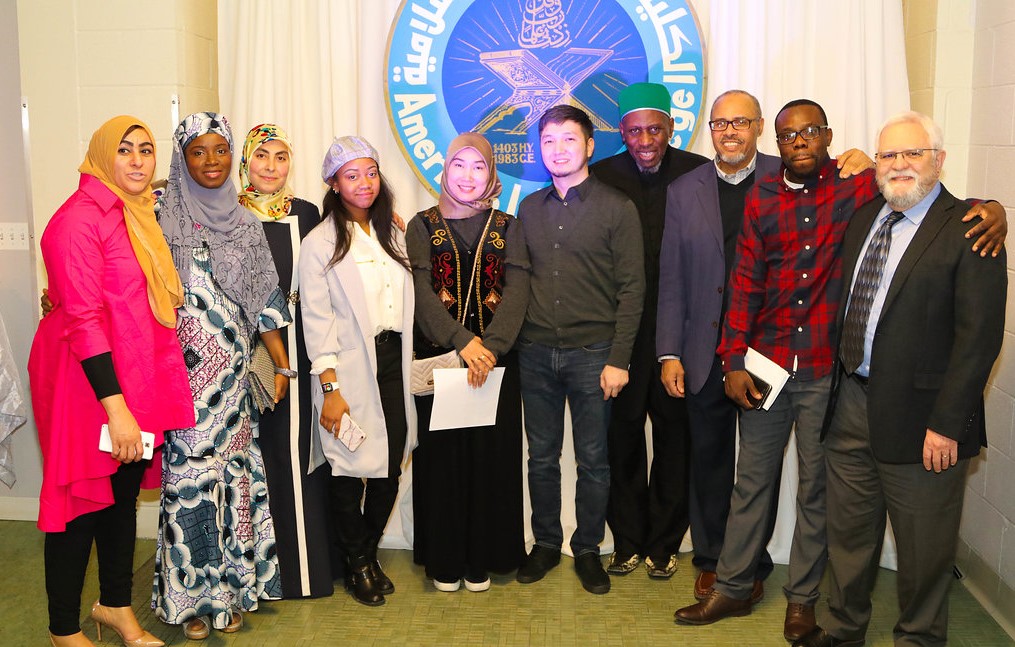 Get Schooled At American Islamic College

Not your typical fundraiser, not your typical college! Join us on Saturday April 7th, 2018 for a unique experience and an opportunity to become a part of AIC’s story. Take a special journey and travel through different classrooms to get “schooled” by talented Muslim artists. Dinner will be provided by Kabul House.

Live Dance Performance by Amirah Sackett
Amirah Sackett is an internationally recognized hip-hop dancer, choreographer, and teacher. Amirah was honored as one of the first female hip-hop artists to receive the Jerome Travel/ Study grant in 2008 and traveled to Holland to study and train at a center in Europe for hip-hop artists. She continues to tour, teach, perform around the country and in her hometown of Chicago. Amirah believes hip-hop culture, as a whole, gives voice to those often unheard and is a way to uplift, inspire, and bring change to those communities that need it the most.

Live Poetry by Jacinda Bullie
An activist by temperament, the daughter of a Choctaw woman, Jacinda Bullie aka Jah da Amp Mouth is a humunist, wife, moms, and practicing Muslima. Prior to rhymes, Jacinda was a natural critique of circumstances, interrogating the world through Hip Hop Poetics. In ’96, Jacinda aka JahdaAmpMouth, alongside Jaquanda V. and Leida GM., co-founded Kuumba Lynx, a Hip Hop art & culture collective. Jacinda is currently a co-curator of the Chicago Hip Hop Theater Fest. Jah recently co-authored a poetic coloring book entitled FILLINZ…Put Some Respect on It!

Live Reading by Dr. Su’ad Abdul Khabeer
Su’ad Abdul Khabeer is a scholar-artist-activist who uses anthropology and performance to explore the intersections of race and popular culture. Su’ad is currently an associate professor of American Culture and Arab and Muslim American Studies at the University of Michigan. She received her PhD in cultural anthropology from Princeton University and is a graduate from the School of Foreign Service at Georgetown University and completed the Islamic Studies diploma program of the Institute at Abu Nour University (Damascus). Her latest work, Muslim Cool: Race, Religion and Hip Hop in the United States (NYU Press 2016), is an ethnography on Islam and hip hop that examines how intersecting ideas of Muslimness and Blackness challenge and reproduce the meanings of race in the US. She has also written for The Root, the Washington Post, the Atlantic, Ebony Magazine, the Huffington Post, Religious Dispatches and Trans/Missions, and has appeared on Al Jazeera English.

Live Ebru class with Sevim Surucu
Sevim Surucu is an Ebru (Turkish Paper Marbling) artist living in Chicago, IL. She graduated from Istanbul University with a Bachelor of Art degree in Landscape Architecture. After working as a landscape architect for a while in Turkey, she moved to the United States. In 2004, she started studying the art of paper marbling because she wanted to combine her love of nature with her love of Turkish Traditional Arts and sharing her prosperous culture to others. In her marblings, she utilizes traditional flower forms and contemporary designs as well as designs of her own. She held many art fairs, where she got awarded many times as an “Outstanding Artist” at the art fairs.

Followed by inspiration by Hind Makki & Ustadh Ubayd’ullah Evans
Hind Makki is an interfaith educator who develops and delivers workshops on active citizenship and community empowerment. An internationally recognized speaker, she has spoken on the subjects of interfaith cooperation, civic integration, and developing Muslim women’s leadership throughout the United States and Western Europe. Hind is also the founder and curator of Side Entrance, a website that documents women’s prayer spaces and experiences in mosques, and she serves on the Islamic Society of North America’s Mosque Inclusion Taskforce. Her work is focused on challenging misogyny, racism and sectarianism in Muslim communities across the country, and has been featured in a wide variety of media including ABC News, Al Jazeera English, National Public Radio, and The New York Times. Hind is an alumna of the American Muslim Civic Leadership Institute and holds a degree in international relations from Brown University.

Ustadh Ubaydullah Evans is ALIM’s first Scholar-in-Residence. He converted to Islam while in high school. Upon conversion, Ustadh Ubaydullah began studying some of the foundational books of Islam under the private tutelage of local scholars while simultaneously pursuing a degree in journalism from Columbia. Since then he has studied at Chicagoland’s Institute of Islamic Education (IIE), in Tarim, Yemen, and Al-Azhar University in Cairo, Egypt, where he is the first African-American to graduate from its Shari’a program. Ustadh Ubaydullah also instructs with the Ta’leef Collective and the Inner-City Muslim Action Network (IMAN) at times.