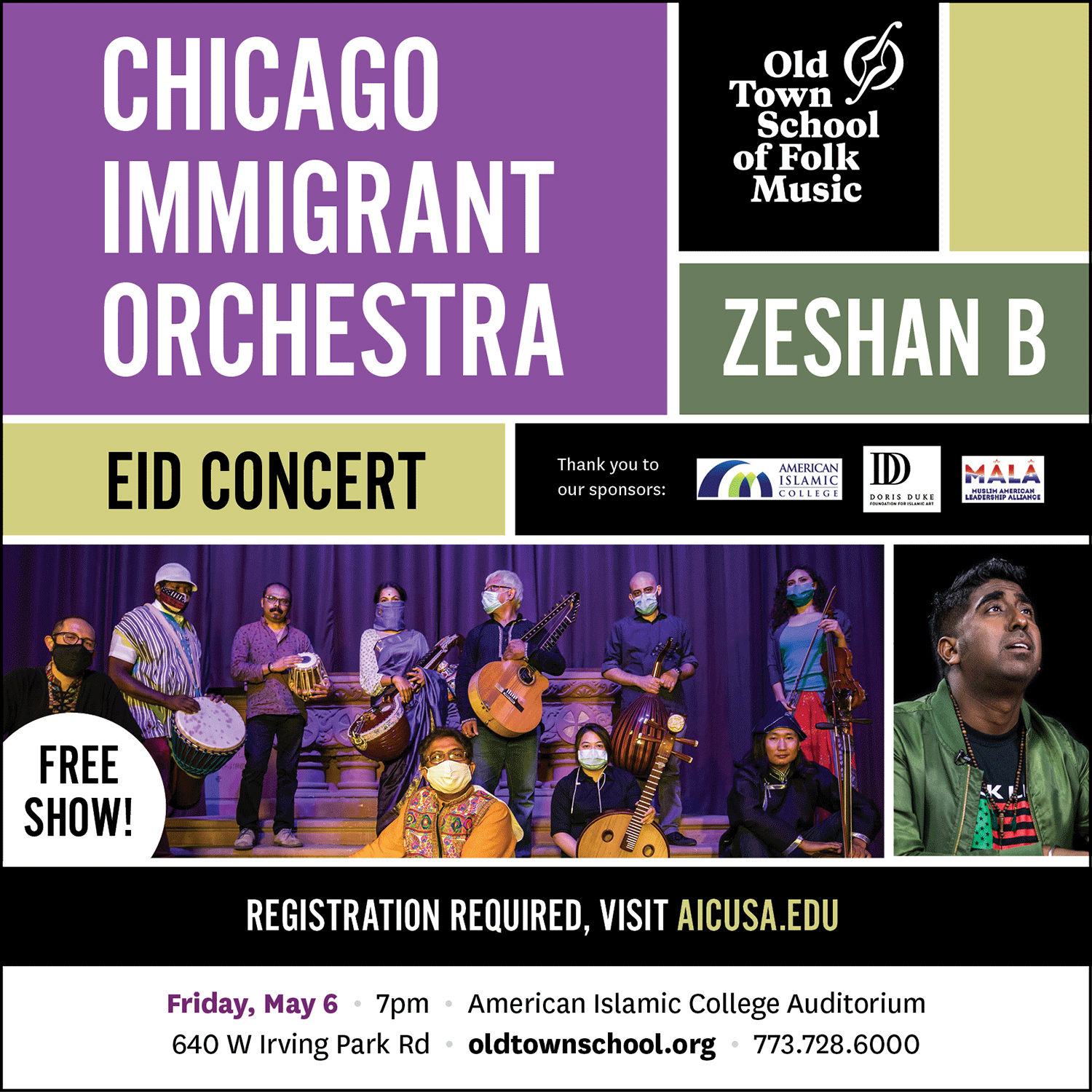 The Chicago Immigrant Orchestra & Zeshan B

With the support and collaboration of American Islamic College, the Old Town School of Folk Music received a grant from the “Building Bridges” program of the Doris Duke Foundation for Islamic Art. This grant supports “Ojala!” — a two-year project that includes eight full residencies and six mini-residencies for Muslim and Muslim adjacent artists in collaboration with a diverse cross-section of community organizations and institutions that are co-producing the project.

On May 6, 2022, The Old Town School of Folk Music, Muslim American Leadership Alliance (MALA), and American Islamic College will bring you musical performances by The Chicago Immigrant Orchestra, and Zeshan B., with host, Amirah Sackett at 7 pm Central. This free event is an Eid celebration, marking the end of the Muslim holy month of Ramadan.

The Chicago Immigrant Orchestra was first established in 1999 by the Chicago Department of Cultural Affairs and Special Events, to be presented as part of the first annual Chicago World Music Festival. Directed by Willy Schwartz, the orchestra involved Chicago musicians from the immigrant community representing music from all over the globe. The project lasted through 2004 but had a lasting impact on the Chicago music scene.

The new CIO today is a 20-piece ensemble that consists of members of the Chicago immigrant community, representing musical traditions from all over the world.

In this fresh approach under the direction of Haque and Zarour, Chicago Immigrant Orchestra musicians from the Far East to Western Europe, Africa and the Americas are thoroughly involved the evolution of the musical ideas that are presented.

The New Chicago Immigrant Orchestra explores the relationships and differences among these traditions, creating a unique and cohesive tapestry of cultures.

Chicago native Zeshan B’s breakout album “Vetted” was released in April 2017 to commercial and critical acclaim with the album debuting at #8 on Billboard’s Top 10 Albums (World Music) and peaking at #1 on iTunes’ World Music chart.

Additionally, “Vetted” has received rave reviews from Rolling Stone, NPR, ABC, NBC, PBS, Salon Magazine, Democracy Now and the Times of India. Zeshan’s hit single from the album “Cryin in the Streets”–his reinterpretation of George Perkins’ 1970 classic civil rights anthem–has garnered praise from the New York Times, PRI, American Songwriter, and Chicago Tribune for its musical finesse as well as its relevance in America’s current socio-political climate. In August of 2017, Zeshan made his US television debut with a stirring rendition of his hit single, “Crying in the Streets” on CBS’s Late Night w/ Stephen Colbert. This was followed by his PBS NewsHour special (“Groovin’ for Change”).

Since then, he has toured with frequent appearances at Lincoln Center, Bonnaroo, Electric Forest Festival, House of Blues, Kennedy Center, the Blue Note, Riverside Church and the Canadian National Exhibition. He has performed for two US Presidents–Jimmy Carter and Barack Obama–with the latter performance taking place at the White House’s historic inaugural Eid Celebration in 2016.

During the ongoing COVID-19 pandemic, Zeshan appeared with his wife Dr. Alexandra Roybal on MSNBC Morning Joe to shed light on COVID’s impact on minorities and musicians. This was followed by the May 2020 release of his NPR acclaimed album, “Melismatic”. (Listen to Melismatic here)

Zeshan is a polyglot–he is fluent in Urdu & Italian and proficient in Spanish and Punjabi. He and his wife reside in the South Bronx, NY.

An internationally recognized hip-hop dancer, choreographer, and teacher, Amirah Sackett explores and embodies her Muslim American identity through combining hip-hop movement and Islamic themes. She is widely known for her creation of the dance group known as, “We’re Muslim, Don’t Panic”Sackett has been a TEDx speaker, guest lecturer at Harvard University, and a cultural diplomat with the U.S. State Department in Bangladesh and Malaysia.

Face masks must be worn by anyone coming to campus regardless of vaccination status.