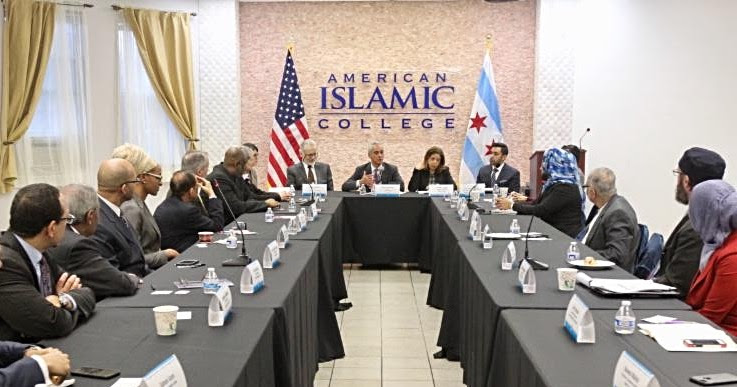 On January 12, 2017, American Islamic College had the honor of hosting Mayor Rahm Emanuel for a round table discussion with Muslim leaders focusing on upholding Chicago’s status as Sanctuary City in the face of new political challenges.

The early morning meeting was conceived and organized by the Mayor’s Office as a means of launching a dialogue with representatives of Chicago’s diverse Muslim Community. The group of some 25 Muslim leaders and activists was drawn from a wide range of Chicago-based Islamic organizations. Among the half a dozen city officials attending the round table were Deputy Mayor Andrea Zopp, Deputy Superintendent Kevin Navarro, Chicago’s 46th Ward Alderman James Cappleman, Danny Solis Chicago’s 24th Ward Alderman, Lisa Morrison-Butler Commissioner of Chicago DFSS, Mona Noriega Commissioner of Human Rights, Seemi Choudry Director of the Mayor’s Office of New Americans and other members of the Mayor’s team.

Mayor Emanuel opened the meeting by focusing on his commitment to the concept and implications of Chicago being a Sanctuary City where hate and bigotry are not tolerated, particularly with respect to immigrants and minority communities. He reassured attendees that the recent changes in the political direction of the Federal Government would only strengthen his resolve to stand by vulnerable communities, and to protect the rights of Muslims in Chicago.

The Mayor was very open and forthright and reiterated the Welcoming City Ordinance message- promising that the City will not ask about immigration status or religious affiliation, disclose that information to authorities, or most importantly, deny someone City services based on one’s immigration status or faith community.

The Mayor’s Office is looking forward to continuing the dialogue with the dedicated and thoughtful leaders that participated in this first of a series of such events. We anticipate that AIC will continue to play a facilitative role.

2017
0
Lecture: Landmarks in the History of Madinah in the Prophetic AgePrevious Post
Lecture: In the Names of God: Approaching the Asma' Allah al-Husna Genre in IslamNext Post