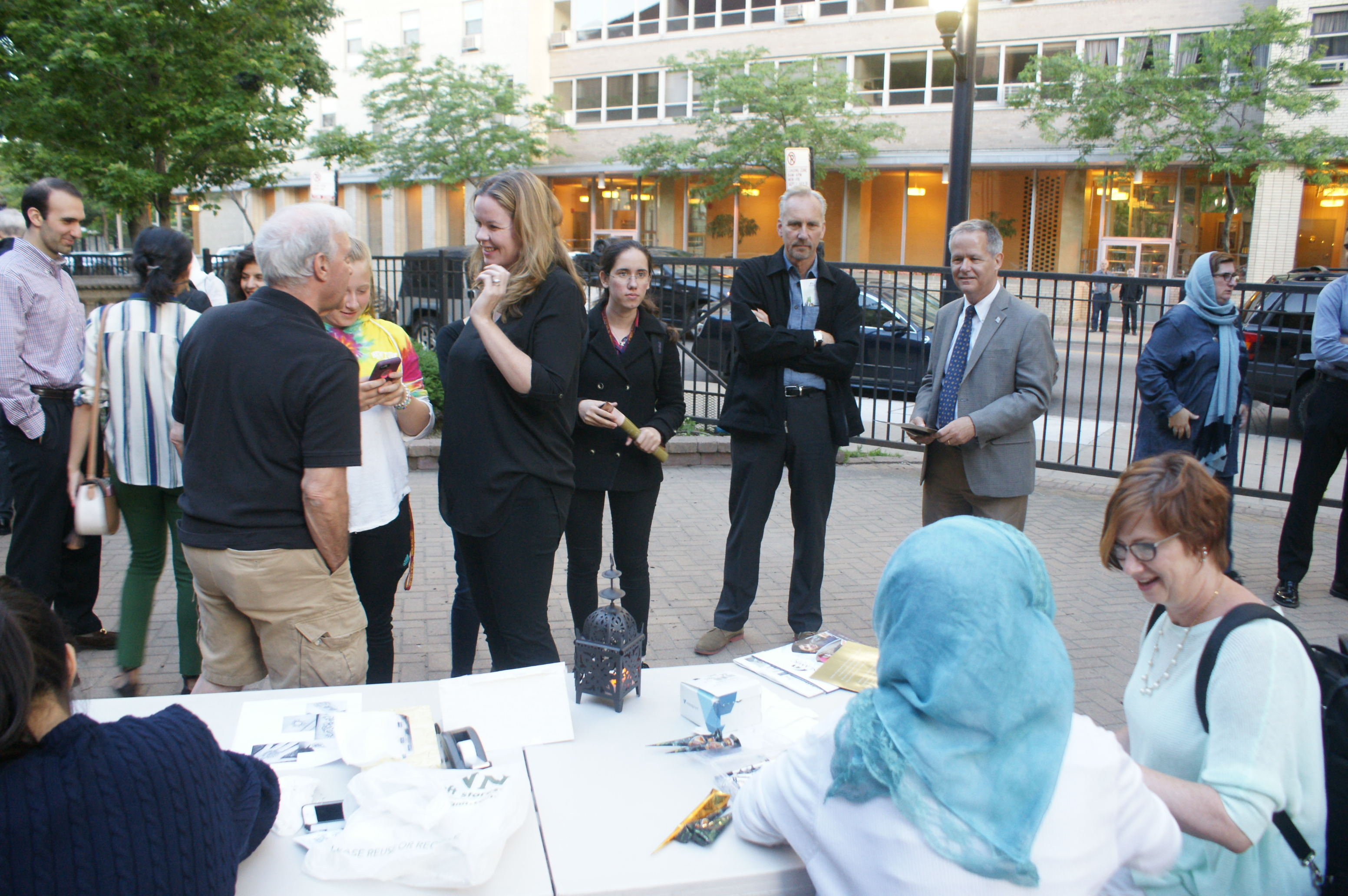 AIC Strengthens Ties with Neighborhood at Taste of Ramadan Festival

On July 1, 2016, American Islamic College held its first ever Taste of Ramadan Festival welcoming our neighbors far and wide to join us in celebration and reflection.

“If I don’t stand up for Muslims, then I’m not being true to others who also need a voice,” James Cappleman, Alderman, Chicago’s 46th Ward

A reflection was shared by one of our guests, Maryam Saleh, Master of Science in Journalism student for your reading pleasure.

Master’s of Science in Journalism, Candidate,

Against a backdrop of live classical Arabic music, Sevim Surucu, explained a Turkish art form to a growing crowd of observers in accented English.

She sprinkled her watercolors onto the water surface of a rectangular aluminum basin to create a marble-like backdrop before using her paintbrush to delicately style flowers. After she completed the design, she placed a sheet of paper on the water and removed it slowly, transferring her artwork.

Surucu’s “ebru,” the Turkish name for paper marbling art, was the most popular exhibit at American Islamic College’s Taste of Ramadan on Friday. The event drew a crowd of about

Ramadan is the Islamic holy month when observant Muslims fast from sunrise to sunset. There are 400,000 Muslims in the Chicago area, according to NPR.

This year, AIC held its annual iftar – the fast-breaking meal – in the courtyard outside its building at 640 W. Irving Park Road in Chicago and invited non-Muslim neighbors.

White and blue balloons adorned the center’s gate and two young boys distributed colorful fliers to passers-by, hoping to draw them in.

“I want people to know who Muslims are, especially in light of the Orlando massacre,” said Arshia Ali-Khan, AIC’s Director of Development. “It’s time that Muslims own their story.”

Less than three weeks after a Muslim gunman killed 49 people at a gay nightclub in Orlando, Florida, the massacre and resulting backlash against the Muslim community weighed on attendees’ minds

James Cappleman, the alderman from Chicago’s 46th Ward, said he’s “not OK” with people blaming Muslims for the actions of a select few.

“If I don’t stand up for Muslims, then I’m not being true to others who also need a voice,” he said, adding that he had faced discrimination as a gay man.

Event admission was free, but organizers suggested a $10 donation for the victims of the Orlando shooting. AIC collected about $1,000 for the victims’ LaunchGood fund, according to President Dr. Ali Yurtsever.

Addressing the crowd, Ali-Khan, said the event represented two of five basic tenets of the Islamic faith, fasting and charity. The remaining tenets are the testimony in the oneness of God, prayer and the pilgrimage. “Ramadan is an opportunity to share with our neighbors food, good will and charity,” she said.

Anya Cordell, said she “loves” the idea of a communal meal, adding that the best way to understand other groups is to “get into each other’s experiences.”

The Rev. Robert Oldershaw, of the St. Nicholas Roman Catholic Church in Evanston, agreed. “Break bread, share a meal – that’s what Jesus did,” he said. “He shared a lot of meals with a rich variety of people.”

The courtyard was a buzz with dinnertime chatter as guests sat on chairs that lined the perimeter of the yard or stood around small tables lit with lanterns.

Ali-Khan, whose face was framed with a mustard-yellow headscarf, mingled with the crowd and spoke passionately about the importance of religious inclusiveness in America, saying she hoped AIC could be a “safe, open space for people to come learn about the faith.”

After the sun disappeared and the sky turned to a starless black, organizers switched on a floodlight, and the conversation continued into the night.

American Islamic College would also like to thank and acknowledge Halal Farm and Mecca store for their contribution to our meal and Turath Ensemble for serenading the campus with live Middle Eastern music and Islamic Nasheeds.

Thank you, everyone, who came out and joined us for this memorable event.